yargs 5.0.0 is currently published to the next tag. To try it out simply type the following:

This release is an exciting one: we’ve both introduced several slick new features (command suggestions, option coercion); and taken the opportunity presented by a major release to cleanup inconsistencies with yargs’ underlying API.

I love how git’s command-line-interface provides helpful suggestions when you accidentally type the wrong command:

With the new recommendCommands() method, you can add this same functionality to your yargs applications:

yargs allows you to provide a type parameter for your options, hinting how the value should be interpreted, e.g., array, boolean, string.

This works great for simple values, but folks routinely ask for more complex parsing options; as an example, people have asked for the ability to parse JSON:

yargs’ new coercion feature allows you to apply an arbitrary parsing function to your options:

I love the concept of coercion, it gives our users much more flexibility when parsing their arguments; without adding any significant complexity to yargs itself.

Commands are one of yargs’ most complex features, and we continue to iterate on their API; we’ve made the following command-related breaking changes in this release:

yargs-parser is the underlying engine that processes the strings passed into process.argv.

We’ve made a couple breaking changes to the parser in this release:

The biggest thing currently on the core team’s mind is documentation. The yargs README has grown unwieldy! we have some plans in the works to help solve this problem:

Hope you enjoy all the exciting updates in yargs 5.0.0! 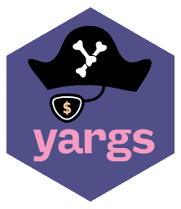